X-ray photoelectron spectroscopy is used to characterise materials and surfaces used as catalysts for numerous chemical reactions with great success. Surface studies of catalysts range from fundamental research of core level shifts induced by adsorbed species as a model of reaction intermediates, to applied research on industrially relevant catalysts. 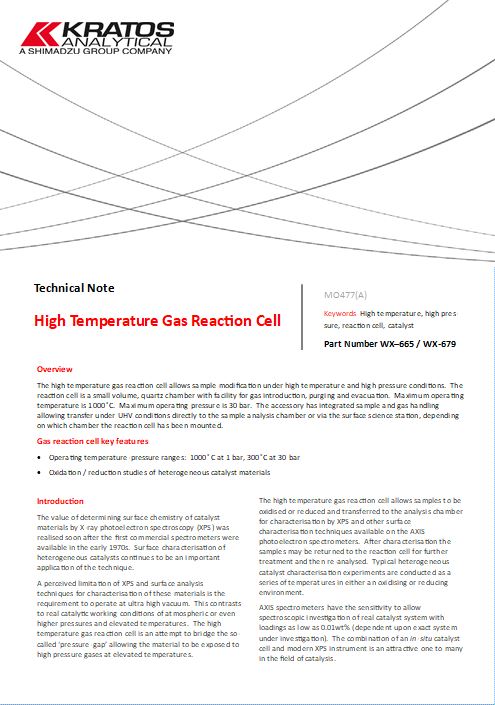 A perceived limitation of XPS and surface analysis techniques for characterisation of these materials is the requirement to acquire data at ultra high vacuum.  This contrasts to real catalytic working conditions of atmospheric or even higher pressures and elevated temperatures.  Kratos have developed a high temperature gas reaction cell to bridge the so-called ‘pressure-gap’ allowing the material to be exposed to high pressure gases at elevated temperatures.

Further information of the high temperature gas reaction cell can be found in technical note MO477.

The AXIS Supra+ can be equipped with in-situ sample heating capability.  This means that the sample can be heated in the analysis position, with data acquired when the sample is at elevated temperatures.

AXIS spectrometers have the sensitivity to allow spectroscopic investigation of real catalyst system with loadings as low as 0.01wt% (dependent upon exact system under investigation).  The combination of an high temperature and pressure reaction cell, in-situ sample heating and modern XPS instrumentation is an attractive one to many in the field of catalysis.

Here we present a number of recent papers which include data acquired users of Kratos AXIS spectrometers.

Stable amorphous georgeite as a precursor to a high-activity catalyst

Copper and zinc form an important group of hydroxycarbonate minerals that include zincian malachite, aurichalcite, rosasite and the exceptionally rare and unstable—and hence little known and largely ignored—georgeite. The first three of these minerals are widely used as catalyst precursors for the industrially important methanol-synthesis and low-temperature water–gas shift (LTS) reactions, with the choice of precursor phase strongly influencing the activity of the final catalyst. The preferred phase is usually zincian malachite. This is prepared by a co-precipitation method that involves the transient formation of georgeite; with few exceptions it uses sodium carbonate as the carbonate source, but this also introduces sodium ions—a potential catalyst poison. Here we show that supercritical antisolvent (SAS) precipitation using carbon dioxide, a process that exploits the high diffusion rates and solvation power of supercritical carbon dioxide to rapidly expand and supersaturate solutions, can be used to prepare copper/ zinc hydroxycarbonate precursors with low sodium content. These include stable georgeite, which we find to be a precursor to highly active methanol-synthesis and superior LTS catalysts. Our findings highlight the value of advanced synthesis methods in accessing unusual mineral phases, and show that there is room for exploring improvements to established industrial catalysts.

ABSTRACT
The one-step transformation of C7–C12 linear alkanes into more valuable oxygenates provides heterogeneous catalysis with a major challenge. In evaluating the potential of a classic mixed-metal-oxide catalyst, we demonstrate new insights into the reactivity of adsorbed oxygen species. During the aerobic gas-phase conversion of n-decane over iron molybdate, the product distribution correlates with the condition of the catalyst. Selectivity to oxygenated aromatics peaks at 350°C while the catalyst is in a fully oxidized state, whereas decene and aromatic hydrocarbons dominate at higher temperatures. The high-temperature performance is consistent with an underlying redox mechanism in which lattice oxide ions abstract hydrogen from decane. At lower temperatures, the formation of oxygenated aromatics competes with the formation of CO2, implying that electrophilic adsorbed oxygen is involved in both reactions. We suggest, therefore, that so-called non-selective oxygen is capable of insertion into carbon-rich surface intermediates to generate aromatic partial oxidation products.

ABSTRACT
We report that a small amount (<1 at%) of gold on ceria single crystals prepared as nanorods (10 ± 2.8 by 50–200 nm) of {110} and {100} crystal surfaces shows excellent catalytic activity in both the steam reforming of methanol (SRM) and the water gas shift (WGS) reactions at low temperatures (<250°C). The ceria nanorods bind and stabilize gold as atoms and clusters (<1nm, TEM invisible). On the other hand, gold nanoparticles ( 3 nm) are found on the {100} surfaces of ceria nanocubes. Very low rates of SRM and WGS were measured on the Au–ceria {100} cubes, while the rates on Au–ceria {110} rods were at least an order of magnitude higher. However, the apparent activation energies did not depend on the shape of ceria. Strong bonded Aun–O–Ce species are the active sites and these are present only in negligible concentrations on the {100} surfaces. Thus, both reactions are structure-insensitive on Au–ceria. SRM proceeds through the methyl formate route. The Au–ceria {110} catalyst shows both high SRM activity and high selectivity to CO2 at temperatures below 250°C.