Natural fibres extracted from wood provide a renewable resource of raw material. At present, wood fibres are used to a large extent for paper-based products, but the potential for alternative uses in future products should not be disregarded. The functional properties of the end product depend on the structure and chemical properties of the fibres, which are largely determined by the composition. XPS is ideally suited to determination of the surface properties of wood, wood fibres and related bio-polymer samples.

However, the application of XPS does present some fundamental challenges including elimination of in-situ surface contamination, sample degradation and charging.  Natural cellulose is a stable but complex fibrous biopolymer, frequently used in industrial applications ranging from papers and textiles to plastics and mixed composite materials.  It is also an interesting model sample for polymer surface analysis as chemically well-defined cellulosic paper specimens are readily available. Air-exposed paper surfaces are surprisingly clean, due to the low surface energy of natural fibres. Paper is also macroscopically smooth enough for XPS, in spite of the microscopically complicated surface geometry. And finally, cellulose has one clear advantage over most polymeric reference materials: the carbon component most descriptive of contamination and decay is almost non-existent. 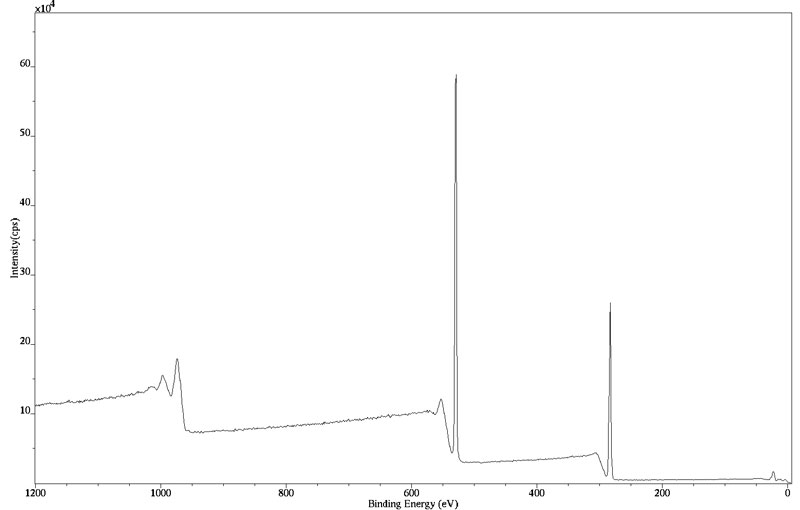 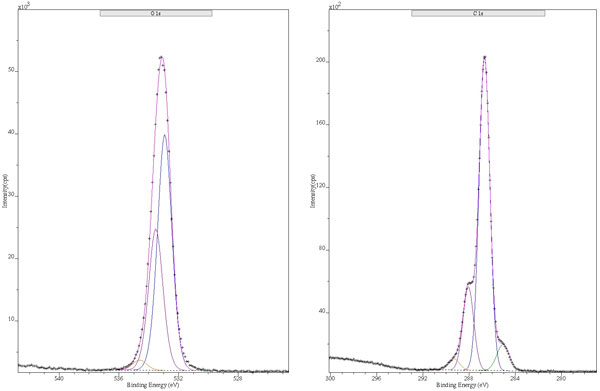 Contamination of air-exposed surfaces consists mainly of carbon and oxygen, with organic hydrocarbon contamination most apparent.  In pure cellulose all carbons are bonded to one or two oxygen atoms, thus any hydrocarbon contamination, observed as a component in the C 1s spectrum at 285.0eV, is easily identified.  It should also be noted that there are other sources of hydrocarbon material including hemicelluloses or lignin residues which might be present on 'real world' cellulose samples.

Degradation during an XPS experiment can be caused by exposure to either particles (ions, electrons) or radiation (x-rays, heat).  The AXIS spectrometers are ideally suited to analysis of delicate samples as they are engineered fro both high sensitivity and high energy resolution.  Spectra may be acquired with excellent energy resolution, as demonstrated by the C 1s and O 1s spectra in figure 1, in only a few minutes thus limiting the x-ray exposure of the sample.  This sensitivity is further demonstrated by the x-ray excited valance band spectrum shown in figure 2. 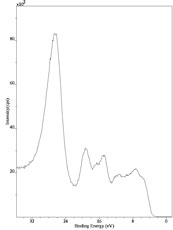 Charge neutralisation is perhaps the hardest challenge in obtaining reproducible, quantitative data on organics. This is because the most valuable information is derived from chemical shifts in carbon and oxygen high-resolution data.  Even slight charging may induce remarkable changes in carbon and oxygen peak shapes, affecting the interpretation.  However, as demonstrated by the excellent resolution of the spectra in figures 1 and 2, charge compensation does not present a problem when using the AXIS spectrometers.

There are numerous publications of XPS studies of paper, cellulose and bio-polymer materials.  Here we detail some publications using Kratos AXIS spectrometers.

The development of ‘user-friendly’ surface analytical instrumentation has expanded the application of x-ray photoelectron spectroscopy (XPS) towards softer and more complex composite materials. However, the knowledge of fundamental phenomena in practical, interdisciplinary applications is dearly needed. In the case of polymers and polymer-based or -reinforced composites, the analytical problems are not only related to detection limits and resolution; indeed, the effects of contamination and experimental artefacts on interpretation of the carbon signal are often the more crucial challenge.  As a biopolymer, natural cellulose fibres provide an interesting model system for polymer studies.  Numerous published XPS studies on lignocelluloses highlight both the possibilities and the problems of the surface analytical probes in analysis of air-exposed organic materials.  We report XPS experiments of cellulosic natural fibrematerials, discussing the effects of sample storage, UHV exposure, radiation doses, charging and data analysis. Based on a large body of experimental data we also propose that clean paper specimens could be used as an in-situ reference in polymer studies.

X-ray photoelectron spectroscopy (XPS) was used to study the distribution of elements and main wood components (cellulose and lignin) within the wood and at the bark/wood interface of a living hybrid aspen stem. The hybrid aspen was grown upright in a greenhouse and then tilted at ~45deg to induce tension wood formation and upright bending of the stem. The wood between the pith and the bark on the upper side of the tilted stem was analysed. Changes in the middle lamella/S1 layer chemical composition, which corresponded to the transition from normal wood produced during upright stem growth to tension wood produced upon stem tilting, were observed. Such changes were related to the lower lignin and higher cellulose/hemicellulose contents in the tensionwood.Anon-uniform radial distribution of nitrogen (amino acids, proteins) within the stem was also noted. At the bark/wood interface the presence of inorganic elements (Ca, K and P) and a significant increase in nitrogen were found. The opposite wood side of the tree was enriched in lignin and fatty acids. It was shown that application of XPS imaging to a very rough surface of wood split allows the inhomogeneous lateral lignin distribution to be visualized.

The alkylketene dimer (AKD) wax dispersion is introduced in the wet-end of a paper machine, and during drying it spreads and anchors to the fiber surface. Direct observation of the surface diffusion of the AKD wax at paper surfaces was obtained using X-ray photoelectron spectroscopy imaging technique. An AKD diffusion of approximately 400um was observed at a paper surface that was stored for 3 h at 80 degC. This gives a diffusion coefficient of approximately 10-11 m2 s-1. Storage for 1 week at room temperature also showed a remarkable spreading of AKD.