Kratos Analytical is now in its 51st year of manufacturing photoelectron spectrometers which started in 1969 with the ES-100 through to the current state-of-the-art AXIS Supra+ with delay-line detector.

As we celebrate our half century we highlight our progress in the manufacture of electron spectrometers at Kratos Analytical.

Our MALDI business is in its 30th year of design and manufacturing of MALDI-ToF instruments which started with the original MALDI II benchtop instrument and has progressed through several generations to the current Axima series and the MALDI-7090 high performance instrument.

Interestingly, the origins of Kratos Analytical lie not with the development of photoelectron spectrometers, but with magnetic sector mass spectrometers.

In this article, we discover how In 1940 with the entry of the USA in the second World War, Nier and his co-workers at the University of Minnesota began the design and manufacture of a few sector field instruments for the analysis of isotopically enriched uranium in connection with the Manhattan Project.  Approximately 40 of these instruments were subsequently produced by the General Electric Corporation (GEC) in the USA, also for use in the atomic bomb project.

The Metropolitan Vickers (MV) Research Department was approached by the Directorate of Tube Alloys of the Department of Scientific and Industrial Research in connection with the manufacture of mass spectrometers for the British part of the same project.  The manufacture of the MS1 allowed MV to extend the skills in vacuum engineering and the production of precise electrostatic and magnetic field which had been developed earlier in connection with the high voltage oscilloscope and the electron microscope.  Anyone wishing to learn more about the development of the magnetic sector mass spectrometers can follow this link to a short overview of these instruments from the early MS1 to the final instruments MS30, MS50, MS25 and MS80.

Kratos Analytical has its origins in Metropolitan Vickers Ltd – one of the major electrical companies dominating the British industrial scene during the early part and middle of the 20th century. Around the 1950’s, Metropolitan Vickers merged with British Thompson Huston (BTH) to form Associated Electrical Industries or A.E.I.  The two companies continued to trade under their own names for about 10 years before they finally changed to A.E.I. During the 1950’s and 1960’s A.E.I. invested heavily in pure research and they set up a small division to build and sell a range of scientific instruments coming out of this research. This was A.E.I. Scientific Apparatus Ltd.

The Early Days of XPS 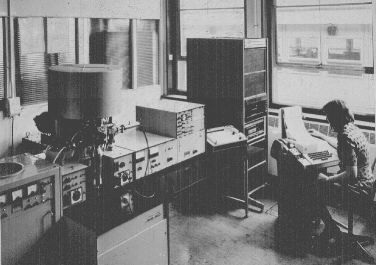 In 1969, AEI introduced their first electron spectrometer, the ES100. It was the first commercially-available instrument to combine successfully three operating techniques' these being high and low energy photo-electron spectrometry and Auger spectrometry. The wide range of possible applications included catalysis study, corrosion research, structural organic chemistry and ceramics technology. The versatility of the ES100 was increased further by the incorporation of several sample handling facilities, together with ultra-violet and electron bombardment sources. This product proved to be a highly successful venture, out-selling all of its competitors.

The following year, the ES200 was announced. This spectrometer was a modification of, and a successor to, the ES100. In addition to the features of its predecessor, the ES200 sample region is designed for UHV applications, a pressure of 10-10 torr being attainable in the source. Sample excitation using monochromatic X-rays is now available thus increasing resolution and minimizing interference. To date approximately 40 of these instruments have been sold.

The "ES" era...
As Dr. David Clark recalls 'as a consultant to AEI Scientific Apparatus (later Kratos), I was involved at an early stage in the design of the first commercial X-ray photoelectron (XPS) spectrometer, the ES100, capable of variable take-off-angle studies. With funding provided by SRC, my research group at the University of Durham took delivery in 1969 of the first commercial ES-100 to be made. [1] And so history was written. In later posts we will highlight the history of Kratos instruments and developments of the technique in celebrating 50 years of leading surface analysis.   With the introduction of the ES100 with fast insertion probe, the ES200 with DS100 data system and the ES300 with monchromator, AEI and later Kratos Analytical established themselves as a major supplier of X-ray photoelectron spectrometers for decades to come.

The XSAM, launched in 1984, had either a dual (Al, Mg) or quad-anode (Al, Mg, Ti, Ag) non-monochromated X-ray source as standard.  The ACIL lens meant that data could be collected from large area or micro- selected areas down to 100um diameter.  With the Mg Ka source running at 450 W large area performance specification was 340 kcps at 0.82 eV FWHM on the Ag 3d5/2 increasing to 6.3 Mcps at 1.3eV.

However, it’s the performance of the Al monochromatic source that catches the eye.  Data from our archive shows that typical performance of the XSAM using the Al Ka monochromatic excitation was approximately 400 cps.  This suggests that acquisition times for ‘real’ samples would have been significant.  In following posts we’ll highlight the developments that have lead to over a 103 improvement in performance. 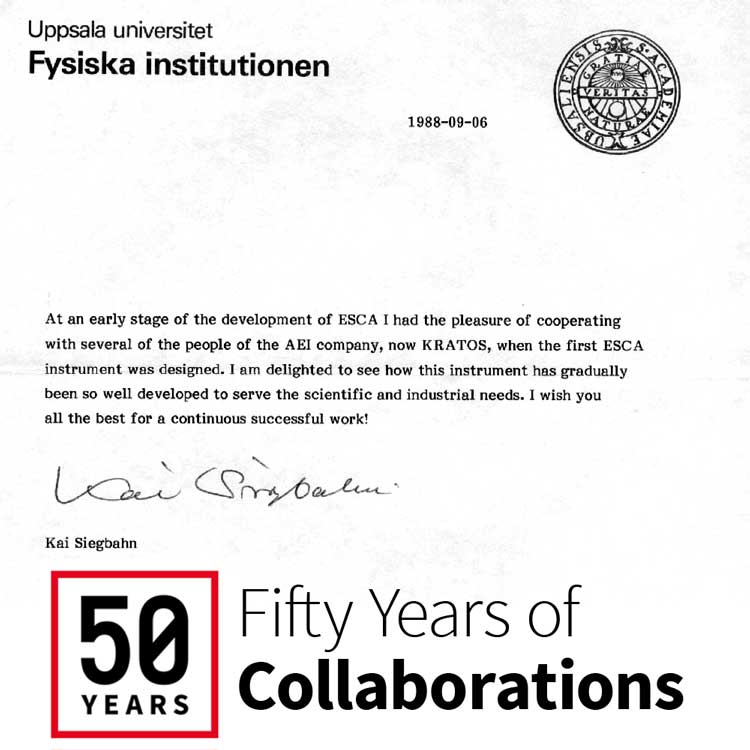 One of the prized items from the Kratos archive is a letter from Nobel Prize winner, Kai Siegbahn. The letter reads 'At an early stage of the development of ESCA I had the pleasure of cooperating with several of the people of the AEI company, now Kratos, when the first ESCA instrument was designed. I am delighted to see how this instrument has been developed to serve the scientific and industrial needs. I wish you all the best for a continuous successful work!' 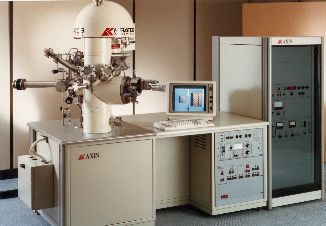 With the introduction of the original AXIS, AXIS HS with a magnetic lens and monochromator, the AXIS HSi with VISON data system and the AXIS 165 where everything is larger.  In 1997 we launched the AXIS Ultra.  This instrument marked a step change in XPS imaging with the introduction of the spherical mirror analyser (SMA) allowing high resolution, real-time imaging.  The AXIS Ultra and it's successor the AXIS Ultra DLD have been arguably the best selling photoelectron spectrometer since the development of commercial XPS instruments.

In other developments, the Shimadzu Research Laboratory was established in April 1997 as a subsidiary of Shimadzu Europe Ltd (SEL), sharing premises and facilities with Kratos.

The AXIS Nova was launched in 2003.  This instrument was based on the now tried and tested AXIS technology of magnetic and electrostatic lenses, co-axial charge neutralisation and SMA but improved with automated sample handling for large, 110mm diameter sample platens.  This 'spectrometer in a box' architecture meant that the AXIS Nova was ideal for high sample throughput without compromise on data quality, just what was required for device manufacturers and industrial research labs.  It also heralded the introduction of all-new electronics and the delay-line detector, a single detector used for both spectroscopy and imaging modes.

A long-term development and expansion programme saw the opening of Shimadzu Research Laboratory's purpose built facility on Wednesday, 3rd May 2006.

While centring on hardware development for mass spectrometers and scanning electron microscopes (SEMs), SRL has gradually expanded its research areas to include bio- and nanotechnology. In the field of mass spectrometry, SRL has strong basic research on new types of ion-trap technology, algorithms for determining the amino-acid sequences of proteins and reagents for the quantitative and comparative analysis of proteins. In the field of SEMs, research projects on algorithms for processing spectral imaging data, ultra-sensitive electron-energy analysers, ultra-low acceleration compact SEMs, and aberration corrected electronic optical systems are in progress, and starting to bear (commercial) fruit.

SRL is primarily engaged in work commissioned by Shimadzu headquarters and functions as a European base for core technology R&D as well as collecting and providing technical information on a contract basis and for other Shimadzu companies.

Towards a half century of XPS... 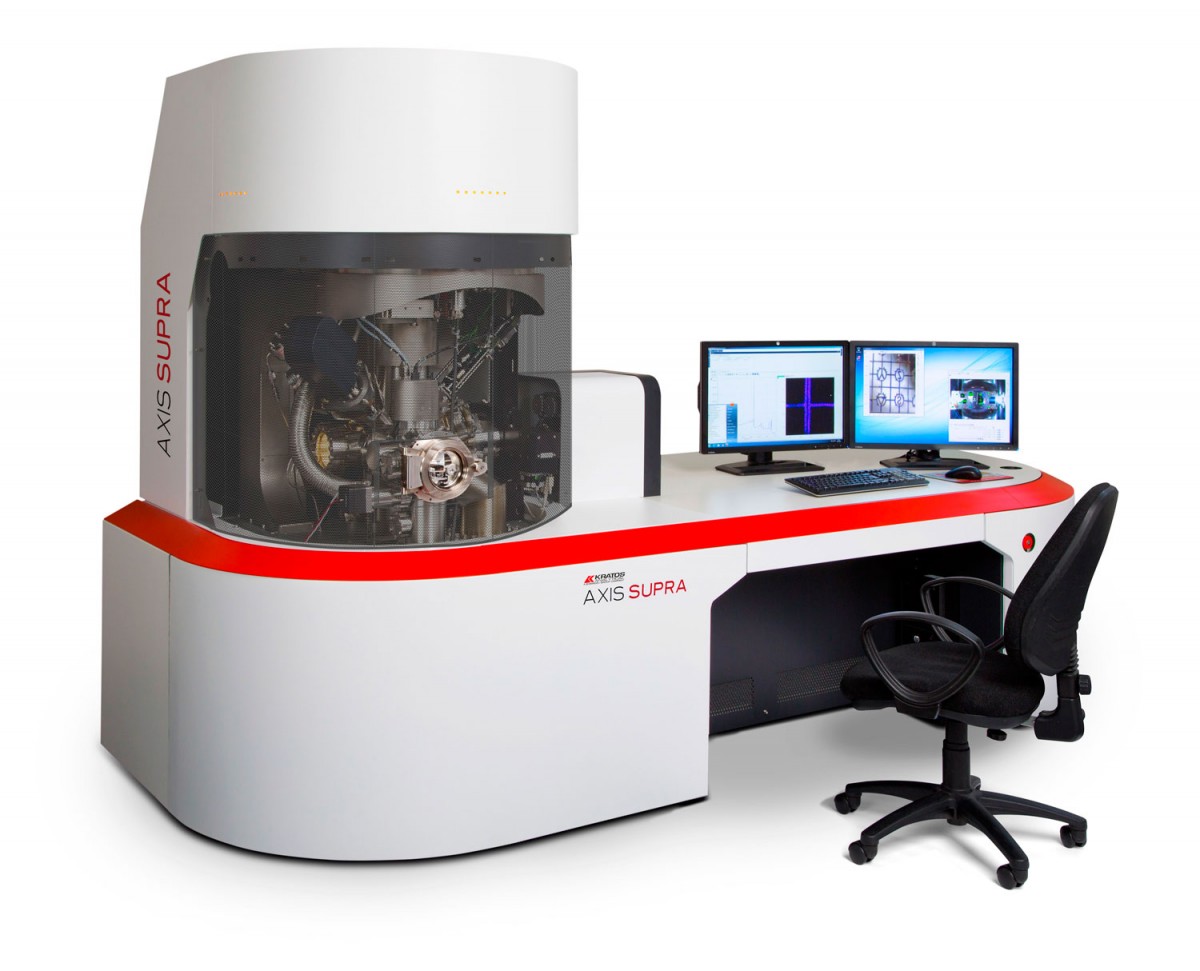 2014 saw the launch of the AXIS Supra.  This instrument continues the AXIS legacy with improvements to spectroscopic sensitivity and spatial resolution in both selected area and parallel imaging.  The AXIS Supra also combines the automated sample handling of the AXIS Nova and the felxibility of the AXIS Ultra DLD giving a genuine all round surface analysis instrument capable of performing in the most demanding research and development labs.