The principles of X-ray photoemission

X-ray photoelectron spectroscopy (XPS) is the most widely used surface analysis technique for materials characterisation.  Standard X-ray sources for lab. based instruments are Al Kα or Mg Kα which provide photons with 1486.6 eV and 1254.6 eV energy respectively.  The spectrometer measures the kinetic energy (KE) of photoelectrons ejected from a material under the irradiation of X-rays, allowing the binding energy (BE) of the photoelectrons to be calculated using the following equation:

where hν is the photon energy and Φ is the work function of the spectrometer.  An implication of this equation is that the highest BE core level electron that can be ejected from a material is dependent on the energy of the photon source used.

In the photoemission process, the binding energy of a photoelectron peak is characteristic of the electronic energy levels of the element.  The chemical environment of that element can cause small perturbations or chemical shifts to the core level binding energy.  It is these shifts, typically between 0.1 – 10 eV from the pure elemental state, that provide the chemical information for a material. 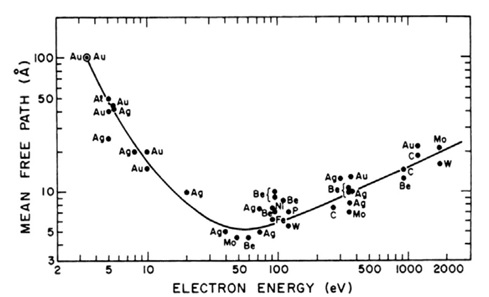 Figure 1: Photoelectron mean free path as a function of electron KE with a ‘universal’ curve fitted through the data points [1].

The use of high energy X-ray sources gives rise to the acronym hard X-ray photoelectron spectroscopy, HAXPES.  By changing the anode material to silver, Ag Lα X-rays can be used to excite photoelectrons.  The photon energy of Ag Lα is 2984.3 eV, approximately twice that of Al Kα (1486.6 eV).  A significant advantage of this is the ability to use the same monochromator mirror for both photon energies, using second order diffraction of the same quartz crystals.

The greater photon energy allows the excitation of additional, higher binding energy core lines for a number of elements as detailed in Table 1. 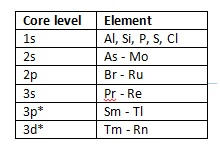 Table 1:  Elements with core line binding energies accessible with Ag Lα X-rays but not Al Kα (*at least one half of doublet) [3].

In addition to accessing a greater number of core levels, a higher photon energy also results in a decrease in attenuation length of higher KE photoelectrons [1], or expressed in another way, an increase in information depth.  By way of an example, the inelastic mean free path (IMFP) of C 1s (BE 285 eV) using Al Kα X-rays is 3.14 nm at KE 1201 eV, but for Ag Lα the IMFP is increased to 5.89 nm at KE 2699 eV [2]. 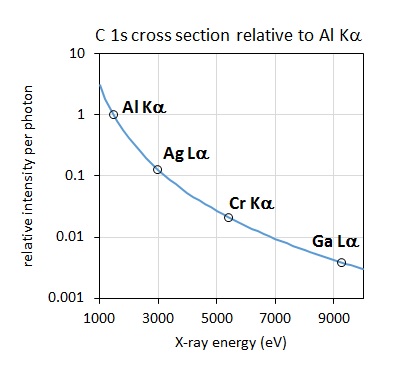 A consideration when acquiring data with higher photon energy sources relates to the decrease in the photoionisation cross section, the probability of exciting a photoelectron with increasing photon energy.  The plot of the relative intensity per photon as a function of excitation energy, as shown in Figure 2, demonstrates that the relative intensity of a C 1s photoelectron is nearly 4 times lower when excited by Ag Lα relative to Al Kα.  This effect is somewhat mitigated by the improved collection efficiency of modern spectrometers, although it is still necessary to collect spectra for longer acquisition times to achieve comparable signal-to-noise.  As noted by Shard et al. [4] for elements aluminium to chlorine, the 1s subshell and associated KLL Auger electron peak appear as strong features.  The large photoionisation cross section for these features almost compensates for the lower X‐ray intensity of the source. The relative intensity of the Si 1s compared to the Si 2p and 2s is shown in the Ag Lα excited survey spectrum acquired from a silicon wafer reference sample, shown in Figure 3. 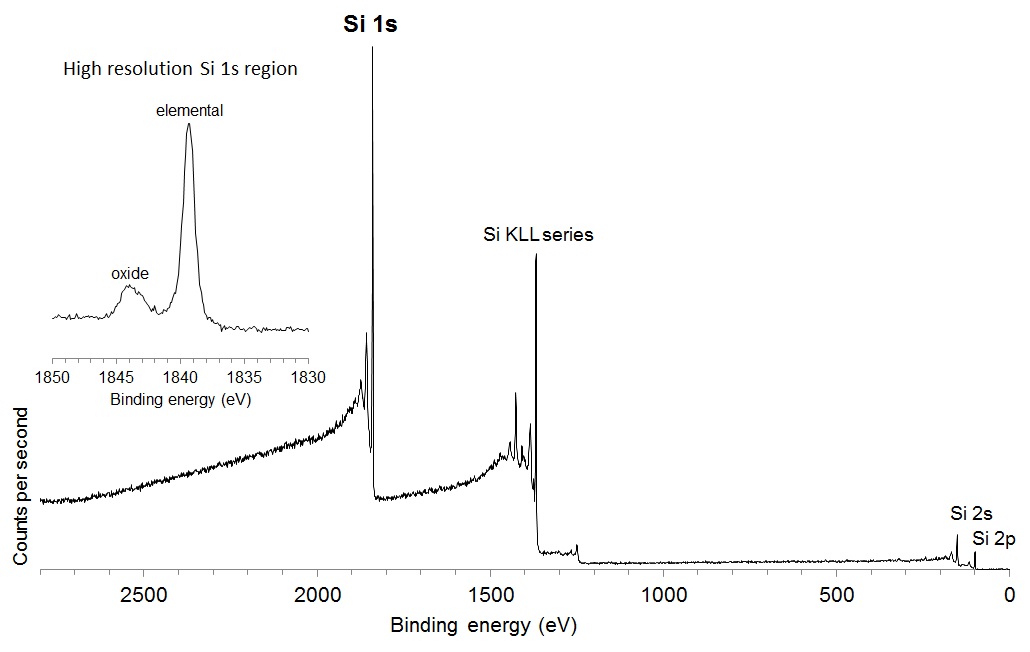 A practical application of the Ag Lα excitation source is shifting Auger electron transitions which interfere with core level photoemission peaks excited by Al Kα.  This is particularly useful in the analysis of 3d transition metals and semiconductor elements, such as Ga and Ge, where the LMM Auger features overlap with the regions of interest when using either Al Kα or Mg Kα excitation sources.  Similarly broad MNN Auger features obscure the Al Kα excited spectra of the 4f lanthanides. By using a higher energy photon source, these Auger transitions are shifted by approximately BE 1500 eV.  This is demonstrated in our recent applications note ‘Eliminating Core Line/Auger Peak Overlap using Different Photon Energies’ [5].

As outlined in a recent research article [6] silicones are an important class of materials that have unique chemical properties that can vary from glass-like materials to liquids.  The publication details the binding energy shifts for the Ag La excited Si 1s, 2s and Auger spectra for polysiloxane materials where the binding energy increases nonlinearly when methyl groups on a silicon atom are replaces by oxygen atoms.  It also details Auger parameter measurements of different polysiloxanes, providing a robust methodology for determining the polarisability of the silicon atoms in these materials.