The majority of polymer materials are insulating and therefore effective charge compensation is paramount if generating high resolution spectra with monochromatic x-rays.  The performance of the AXIS spectrometers is demonstrated by the guaranteed performance on PET where the FWHM of the component corresponding to the ester group is <0.68 eV with a sensitivity defined by the maximum of the hydrocarbon peak >12 kcps.

The analysis of organic materials such as phenyl-C61-butyric acid methyl ester (PC61BM) by depth profiling is typically fraught with difficulty due to the fragile nature of the sample. In this work we utilise a gas cluster ion source for the controlled depth profiling of organic materials that would historically have been too fragile to analyse and obtain quantitative compositional data through the whole thickness of the film. In particular we examine the oxygen diffusion and photo-oxidation kinetics of one of the most commonly used electron acceptor materials for many organic optoelectronic applications, namely PC61BM, in both neat films and in blends with polystyrene. Exposure to AM1.5G light and air under ambient conditions, results in a higher level of surface oxidation of blended PC61BM:polystyrene than is observed for either pure control film. Gas cluster ion source depth profiling further confirms that this oxidation is strongest at the extreme surface, but that over time elevated oxygen levels associated with oxidised organic species are observed to penetrate through the whole blended film. The results presented herein provide further insights on the environmental stability of fullerene based organic optoelectronic devices.

Another excellent publication demonstrating demonstrating the information that can be gained by combining XPS and the Arn+ gas cluster ion source for with depth profiling complex polymeric devices can be found in Energy Environ. Sci., 2015, 8, 332.

The microstructure and photophysics of low-band gap, all-polymer photovoltaic blends are presented.  Blends are based on the donor polymer BFS4 (a dithienyl-benzo[1,2-b:4,5-b]dithiophene/5-fluoro-2,1,3-benzothiadiazole co-polymer) paired with the naphthalene diimide-based acceptor polymer P(NDI2ODT2).  Efficiencies of over 4% are demonstrated, with an open circuit voltage of greater than 0.9 V achieved. Transmission electron microscopy reveals a relatively coarse phase-separated morphology, with elongated domains up to 200 nm in width. Near-edge X-ray absorption fine-structure (NEXAFS) spectroscopy and atomic force microscopy (AFM) measurements reveal that the top surface of BFS4:P(NDI2OD-T2) blends is covered with a pure BFS4 capping layer. Depth profiling measurements confirm this vertical phase separation with a surface-directed spinodal decomposition wave observed.  Grazing-incidence wide-angle X-ray scattering (GIWAXS) measurements confirm that BFS4 and P(NDI2OD-T2) are semicrystalline with both polymers retaining their semicrystalline nature when blended. Photoluminescence spectroscopy reveals incomplete photoluminescence quenching with as much as 30% of excitons failing to reach a donor/acceptor interface. Transient absorption spectroscopy measurements also find evidence for rapid geminate recombination.

Polymer surface characterisation may also be applied to the Plasma Treatment of Textiles where the application of low pressure and atmospheric pressure plasmas for the functionalisation and coating of textile surfaces is growing in importance. As regards new textile products, key areas of plasma process activity include the production of repellent surfaces to prevent/limit the adhesion of biofilms/bacteria e.g. for surgical and hygiene applications.

Polymer meshes, such as polypropylene and polyester, are used for the surgical repair of hernias and other soft tissue defects. Whereas the use of mesh material has lead to a widely accepted improvement in this kind of surgery, their implantation can be associated with serious infection rates.  In order to reduce the infection rates of such meshes, their surface properties have to be improved.

XPS has been used to study the plasma deposition of a polyethyleneglycol-based (PEG) coating on meshes. The aim is to produce a stable PEG-rich surface which is repellent to biomolecules and cells (anti-adhesive/anti-fouling), thus enhancing the biological integration of the meshes. 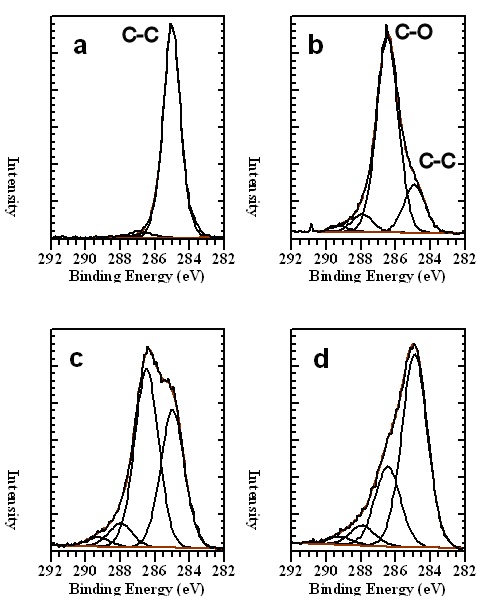 The PEG coating coverage and integrity can be quantified as a function of the plasma treatment parameters such that XPS can help to optimise the PEG coating for maximum anti-adhesive properties.  The technique can be further used to assess, for example, the effects of sterilisation (i.e. autoclaving, gamma irradiation, ethylene-oxide) or packaging/storage on the integrity of the PEG coating. 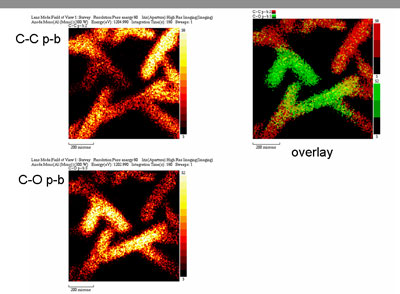 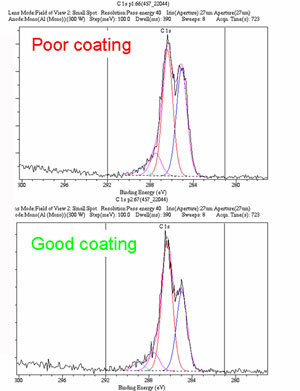 The coating of surgical meshes represents a challenge for the plasma technologists.  Surface analysis techniques are playing an important role in the developments.