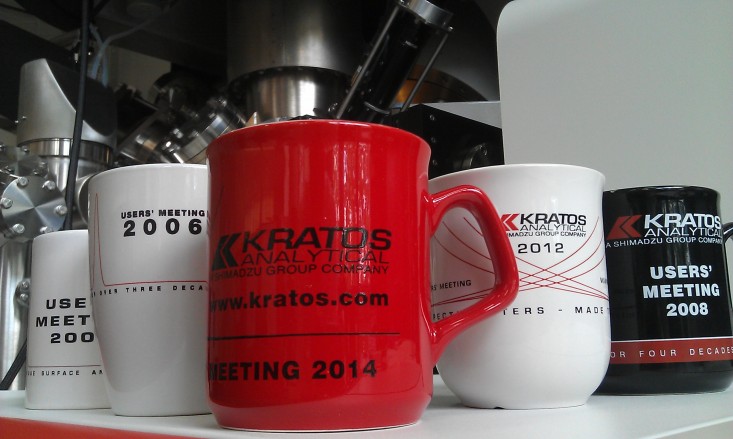 The 2014 European surface analysis Users meeting was hosted in Manchester and attended by over 45 participants from 29 different institutions.

The meeting was opened by Kratos’ Managing Director, Kozo Shimazu who gave an overview of Kratos’ position within our parent company Shimadzu Corporation.  This was followed by an overview of the Kratos Surface Analysis business since the previous meeting.  The first User presentation was ‘Nanoscience and nanotechnology at the Hebrew University of Jerusalem’ where Vitaly Gutkin gave a nice overview of the many different types of samples that he analyses.  This was followed by a presentation from Ginesa Blanco of the University of Cadiz titled ‘Nanoparticulated ceria dispersed over silica : XPS study of the redox deactivation process’ in which Dr Blanco highlighted the detailed studies that she has undertaken using the gas reaction cell.  Continuing the theme of accessories Sarah Coultas presented ‘High energy XPS using an Ag monochromatic x-ray source’ giving examples where the increased energy range can be useful in exciting higher binding energy core levels and Auger transitions and also analysis from greater sampling depths with respect to the conventional Al monochromatic x-ray source.  The theme of sampling depth was continued in Vincent Fernandez’s presentation ‘ Dimension and chemical state characterisation of Cu oxide nanoparticles supported on graphite’.  Dr Fernandez also took the opportunity to highlight the proposed workshop in July 2016 to be held in Roscoff, France titled ‘XPS : from measurements to scientific answers’.  The final presentation of the day was by Kratos’ Helen Brannon where Dr Brannon reviewed work undertaken for her recent PhD studies at the University of Birmingham, ‘Understanding adhesion using surface analysis’.

One important aspect of the Users Meetings has always been the opportunity to network and discuss any number of topics informally. And what better venue than Akbar’s – The North West’s legendary Pakistani restaurant with naan breads the size of a duvet.

Despite the late night, Tuesday morning’s session was opened by Marco De Ridder at 9am with an overview of ‘XPS in the petrochemical industry’ demonstrating the application of XPS in solving and different challenges to many types of samples from the petrochemical industry.  Following on from this the first of several presentations on sputter depth profiles was given by Steve Spencer where he discussed the use of the coronene ion source at NPL in his contribution ‘Organic depth profiling in XPS’.  Simon Hutton then explained the use of one of Kratos’ recent developments, the Ar gas cluster ion source, for polymer depth profiling.   Dr Hutton’s talk demonstrated that the gas cluster ion source is ideally suited to retention of polymer chemistry during Arn+ depth profiling of many different types of polymers and doesn’t suffer from some of the limitations associated with ion sources using either coronene (C24H12) or C60.   Further characterisation of a GCIS was discussed by Anders Barlow and Peter Cumpson in their presentation ‘Argon gas cluster etching of technological materials: In-situ sputter yield measurement and unexpected surface damage’.   This presentation sparked some interesting discussion on the effects of partition energy of the Ar atoms within the large cluster ion and its effect and interaction on the material being sputtered as well as the increase in sputter yield caused by degradation caused by a micro-focused x-ray source.  This took us to morning coffee!

The subject of Arn+ gas clusters was continued after the coffee break with Adam Roberts presenting ‘studies of oxidation states of Mo oxides and MoS2’ both as a function of x-ray exposure and after sputtering using the GCIS.   The final GCIS based presentation was from Jonathan Counsell on ‘Profiling inorganic materials with cluster ions’.  In this oral contribution Dr Counsell outlined the use of the large Arn+ ions for both sputter cleaning and sputter depth profiles of inorganic materials.  The aim of his presentation was to underline the use of large Ar clusters at high energies to minimise the chemical damage in the form of preferential sputtering of oxide materials causing sample reduction.  This was nicely demonstrated by the reduced reduction of Ti4+ during the sputtering of titania.

The focus after lunched shifted from Arn+ clusters to applications of parallel imaging.  The session was started by Sarah Coultas presenting ‘quantitative imaging – analysis from multiple small areas’.  This was followed by the long-time proponent of parallel imaging John Walton presenting ‘How bad is rough? – Insights into imaging real surfaces’.  In his presentation, Dr Walton demonstrated the consequence of analysing rough samples on the quantification of images using glass beads as an example.

Following the oral contributions it was a case of dodging the rain for the short walk over to the applications lab for practical sessions in front of the spectrometers in the lab and a tour of the newly refurbished, clean room manufacturing and instrument area.   This was run in parallel with a poster session back in the meeting room which was orchestrated to perfection by Sarah.

Tuesdays social event was a trip to Robinsons Brewery in Stockport.  With over 175 years of brewing experience this proved to be an absorbing experience with a tour of the brewery where we journeyed through the brew house and learnt about our hopnik and cereal cooker used to enhance the flavour of the beers such as Dizzy Blonde, Trooper and Old Tom.  An excellent evening was rounded off perfectly by traditional English food served in the brewery tap. 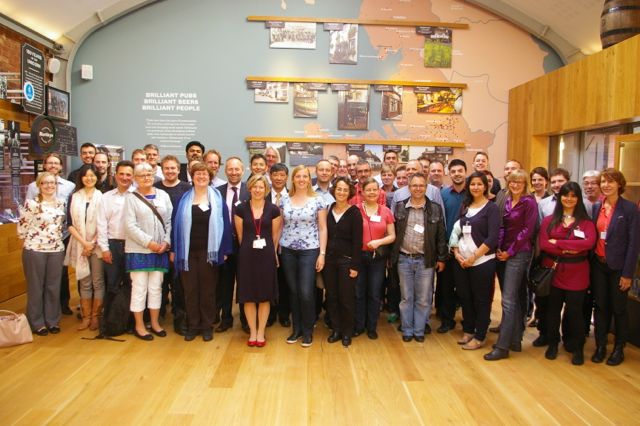 After starting the morning with a strong coffee Nico Bovet gave a fascinating presentation of ‘two-dimensional electron gas at the interface of Al2O3 / SrTiO3 : when 2 insulators become conductive’.   This was work that strayed away from the core research of Dr Bovet’s group and was done ‘just for fun’ but proved an interesting topic that stimulated great interest.   The second of the three Scandinavian presentations was from Leena-Sisko Johansson of Alto University titled ‘Identifying charging in photoelectron spectra’.   Again this proved an interesting subject and one that stimulated a great deal of discussion.  The final presentation of the meeting was given by Marie Ernstsson where she outlined ‘Surface analysis at SP chemistry, materials and surfaces – XPS imaging of fibers, films and powders’.

For those attendees with the stamina the workshops that had been run on Monday morning were repeated and included ‘Quantitative imaging using AXIS instruments’, ‘An introduction to AXIS technology’ and ‘Calibration routines for the delay-line detector’.

It was agreed that the meeting was a great success with the opportunity for Users to network being one of the primary motivators for attending the meeting.  Most of the talks detailed above have been made available in the Members Area, although a number had to be limited due to confidentiality.  All those involved at Kratos Analytical would like to extend our thanks to all those who attended and made the meeting the success it certainly was.  We look forward to further sales and inviting even more Users to the next meeting.

Here at Kratos we are always keen to keep in contact with our Users and anyone interested in our products or even those with general interests in surface analysis and analytical instrumentation.  There are now a number of ways that you can interact with us here at Kratos including our Facebook, LinkedIn and YouTube pages.  For Users of Kratos AXIS spectrometers we also have the Users Area.  Why not register to use the Members Area which giving access to downloads and answers to FAQs?